Once again I find myself writing about the Association of Teachers of Mathematics and their fortnightly Twitter sessions (@ATMMathematics, #beingmathematical. See my earlier blog entitled “Working with place-value: an increasing constraints activity”). A recent one came on the back of the second meeting of the Glasgow Branch of ATM, organised and hosted by Chris McGrane, Principal Teacher of Maths at Hillhead High School and delivered by ATM stalwart Mike Ollerton, on the theme “No setting and no textbooks; what would you do?”. The two events complemented each other beautifully and I’d like to share here some of the thoughts and actions they inspired in me.

Here is the # beingmathematical task – taken from the ATM publication “Exploring Mathematics With Younger Children” – that formed the stimulus for the Twitter session.

Mike had provided a similar task involving triangles at his workshop the Saturday before. The tasks he had us doing with these paper cut-out shapes – some of the many learning activities that made up his workshop –  showed how such seemingly simple ideas could be used across a wide age-range to challenge and extend ever more advanced learners of mathematics.

This linking of child-like playful activities with sophisticated mathematical ideas resonated with my experience, two weeks earlier, of the previous #beingmathematical event where the task involved fitting unit-area regular hexagons within a larger hexagonal “frame”. I’m becoming increasingly aware of how valuable such activities are for my own development, both mathematical and pedagogical.

When the triangles task was first posted on Twitter, it was accompanied by the reflective questions “What did you do?” and “How might this inform your pedagogy?” As usual, though, I homed straight in on the task. I began to cut out some triangles from A4 card, following the diagram provided. I wondered how a child, or someone of any age for that matter, would approach creating a square from a rectangle. Here’s how I did it, using two identical cards to mark off the shorter side from the longer.

I repeated the process with the off-cut rectangles to generate, altogether, two large and four smaller squares, each the parent of four triangles.

I later decided to increase my stock by cutting out then halving the larger triangles. Having started by folding then cutting along the line of symmetry, it soon occurred to me I could use the rotational symmetry of the squares to find the line along which I should cut.

Thus, even before beginning the specified assignment, I found myself thinking not only mathematically but also of the pedagogical value of hands-on tasks like this one: the act of creating your own working resources here is inherently mathematical.

As suggested in the instructions to the task, I started playing around, combining the triangles in various ways.

As may be evident from the photo, this was a fiddly (or footery, as we say in this part of the world) business, and I soon called it a night.

At some point before I sat down again to resume work on the task the idea of drawing a grid on which I could assemble these triangles occured to me. This would be less footery and would allow me to record my shapes for later analysis.

I produced the following on plain paper using only the (well-used) ruler and pencil shown.

Being over a certain age, I have had occasion in the past to produce neat grids, tables, etc. before I had access to any ICT, so this task didn’t phase me. Once again, though, I wondered if everyone else – especially people of the digital generation –  would be able to do the same. Would they be able to ensure the individual lines were

I made some photocopies of this master-sheet to work on. As I travel to work by bus, I thought I could work on the task during my journey. However, this proved awkward using A4 single sheets. I quickly drew up another grid in a 5mm-square jotter and produced the following shapes. (Most of my fellow commuters are used to me doing some kind of maths work en route; the raised eyebrows have returned to their normal positions and some people have even braved sitting next to the crazy maths guy!)

The annotations refer to the numbers of unit triangles and sides of the resultant polygons – i.e. to a more specific attending to the quantitative aspects of the task – and to my observations regarding repetition or symmetry.

On the way home, I took out a few card triangles to experiment some more. I soon realised there were some shapes I could make but was unable to represent on my grid. Here is the simplest one – perhaps you can see why?

Anyway, I set about constructing an additional grid, as shown below.

This was on the day of the Twitter event, just a few hours before the usual 8.00pm start time. Rather than create, record and classify some more shapes in accordance with the task instructions, I started thinking about the supplementary questions referred to earlier, in particular, “How might this inform your pedagogy?”

Back to the previous Saturday. Mike’s session was very much about pedagogy: practical pedagogy. Essentially, his message was about how much learning we can get out of a well-designed task. I remembered some of the prompts he had provided for the tasks he shared with us, and the way these generated ideas and discussions among the teachers who formed his audience.

I decided that my purpose in the evening’s #beingmathematical event would be to ask questions rather than answer them.

I started with two questions I have already posed here: accompanied by photographs, I asked

My next question broached the idea of proof in mathematics:

(Mike referred to these triangles using the acronym IRAT).

It’s an interesting thought as to the age and stage at which learners could begin to answer this question. Clearly they would need to understand the mathematical vocabulary. However, performing some simple comparisons of side-lengths and angles between two cut-out triangles, would not, I would conjecture, be beyond the inventiveness or comprehension of some young children. ( I recently showed a senior pupil how to create a square frame by cutting along the midlines of two interlocked paper loops and was amazed – and very impressed – to watch her, child-like, reverse the process to reconstruct the loops so that she could better understand the surprising result she had just witnessed.)

My next few questions were directly influenced by Mike Ollerton, via the workshop already mentioned above.

Assigning a single unit to the area of each IRAT is clearly the simplest approach and the task should be accessible by any child who can count and has a basic understanding of area. For children who have not encountered the concept of area, then what better opportunity to introduce it? (One participant in the previous Twitter event expressed their surprise that shapes created from hexagons would have areas expressed in square units; what would younger learners make of expressing a total area in terms of triangular units?). For older learners who have met fractions, assigning a unit of area to the parent square adds challenge to reckoning total areas for the shapes constructed. An opportunity to introduce or extend knowledge of equivalences of halves and quarters, and/or improper fractions, perhaps?

Moving on to thinking about perimeter allows us to extend the task to algebraic modelling and, in particular, provides a meaningful context in which to collect like terms. (Thanks, once again, to Mike for sharing this idea).

Considering shapes constructed by joining unequal sides of the IRATS adds to the scope and challenge of theses links to algebra.

”What is the perimeter of the shape below in terms of a and b?”

For those further on in their learning, the Pythagorean Theorem and the ability to work with surds can be brought into play. 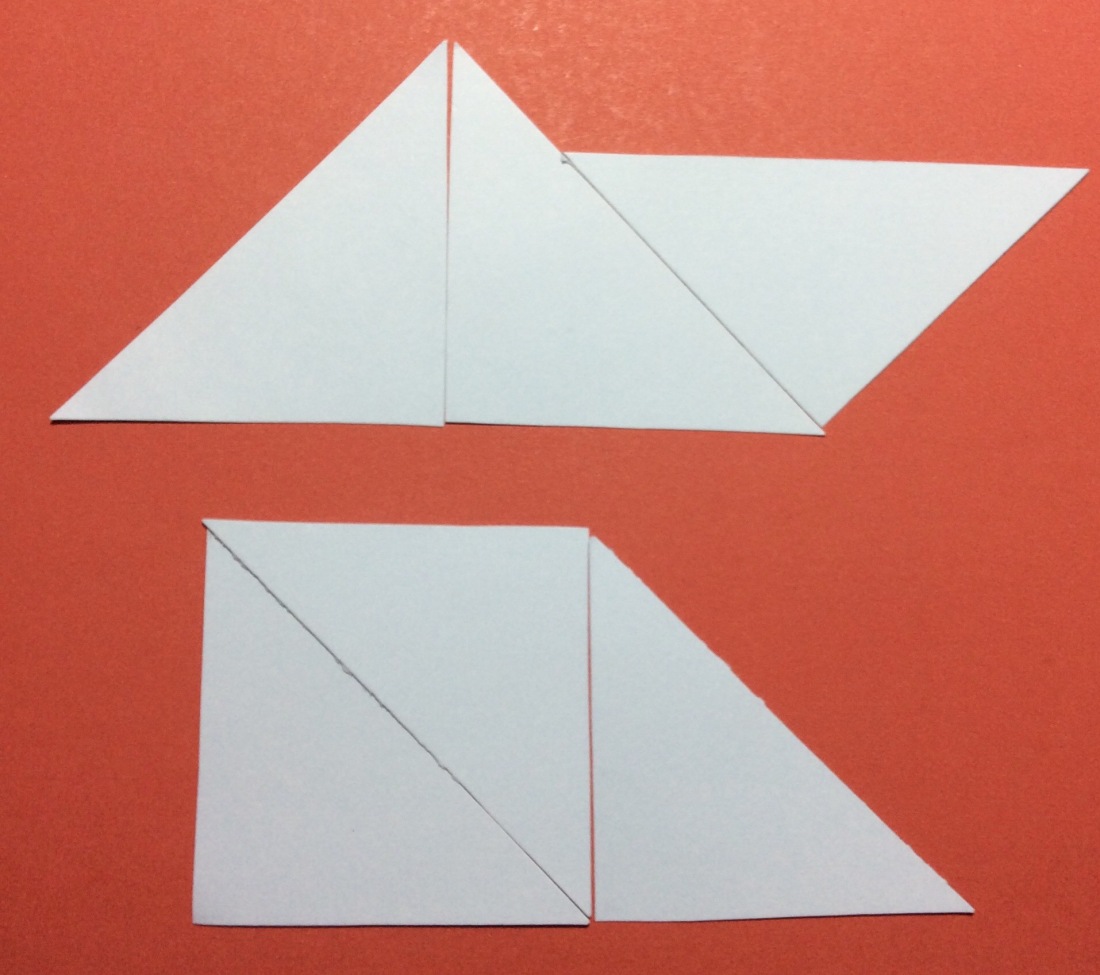 Look again at the two unit-side-length triangles shown above.

Consider the shapes you have constructed or any (all?) of the shapes shown above.

Here are some other questions that could be used with learners across a range of age and experience.

To conclude this reflection on what, I hope you agree, proved to be a very rich #beingmathematical task I offer a few more photographs. These will hopefully serve as a reminder that tasks like this are also a great leveller, where the young, the old and everyone in between can just have fun creating beautiful things from simple building blocks.

Once again, spending time working on a task that is both simple and engaging enough for young children has afforded me the opportunity to step back from what I “know” and to see aspects of mathematics in fresh and exciting ways. The American sociologist and psychologist George Herbert Mead (1863 – 1931) argued that children develop their sense of self and become socially mature through taking on, symbolically, the roles of others, particularly adults. Crucially, the main vehicle for this process is play. I find that I, even as a somewhat mature adult, am growing in terms of my mathematical identity by taking a much younger and more playful perspective on learning, teaching and doing mathematics. I am reminded of the recurring lines in the Bob Dylan song whose title I have appropriated for this article:

My Back Pages, from the 1964 album Another Side of Bob Dylan.

In part 2 of this blog I shall use some observations and questions posted by other #beingmathematical participants to reflect on ideas of proof through the eyes of both novice and experienced mathematical thinkers.

Thank you for spending some time with me and my thoughts; I hope it was worthwhile.

Explorer, learner and teacher (predominantly of mathematics) with an interest in the possibilities for growth in all three endeavours. A lifetime resident of North Lanarkshire; currently teaching in Glasgow, Scotland. View all posts by gerard mcnally

4 thoughts on “My Back Pages – Part 1: on #beingmathematical and being young (again!).”